The Geology of Yellowstone: A Biblical Guide, by Patrick Nurre

Young-Earth creationists (YECs) believe that the Bible requires that almost all features of Earth’s crust are the result of Noah’s Flood about 4300 years ago. These books are, in the words of Nurre, “an attempt to present the geology of Yellowstone from a Biblical perspective,”, as opposed to the standard geological timeframe in which the history of Yellowstone goes back a few billion years to the Archean Eon. This “biblical geology” effort is misguided, however, as the Bible does not say anything about processes such as igneous intrusion, volcanism, erosion, sedimentation, metamorphism, and glaciation. This results in a serious over-reading of the biblical text, leading to erroneous conclusions about the origin of geological features in places such as Yellowstone.

As a Christian, I believe that “In the beginning God created the heavens and the Earth” (Genesis 1:1), and I believe Noah’s flood was a real, historical event, though I believe it was local, not global, in extent and effect. The biblical account of Noah’s flood (Genesis 6-9) tells us nothing about how the igneous, sedimentary, and metamorphic rocks of Earth’s crust came to be, especially in places as far from biblical lands as Yellowstone. There is, therefore, no need to come up with a “biblical” explanation for Yellowstone.

Your Guide to Yellowstone and Grand Teton by Hergenrather et al.

This is a well-written, nicely-illustrated book. Of the four authors, Dennis Bokovoy has a MS degree in geology, which helps to ensure that the book at least uses geological terms correctly. Michael Oard is a prolific writer on a wide range of topics in the YEC movement. The other two authors are John Hergenrather and Tom Vail.

Much of the book consists of typical tourist guidebook information: what to see at Old Faithful, Mammoth, Canyon Village, and so forth. The overall premise of the book, however, is that the geologic features of Yellowstone can be better explained in a so-called biblical model, which actually goes far beyond anything the Bible says.

As in most YEC literature, the book presents the alternatives as either evolution over millions of years, or creation less than 10,000 years ago. Many who read this book, either Christian or non-Christian, will not be aware that these are not the only options. There are many highly-qualified theologians, pastors, and scientists who accept the Bible as inerrant and authoritative who reject the overly-literal young-Earth interpretation of Genesis.

The book is fairly shallow in terms of its presentation of the case for a young-Earth interpretation of Yellowstone. It is admittedly written for a general audience, but it fails to develop a convincing case that the geologic features of Yellowstone are better explained by Noah’s flood, acting just a few thousand years ago.

The Geology of Yellowstone by Nurre 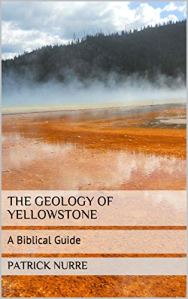 The biography at the back of the book states that Patrick Nurre “has been a rock hound since childhood.” I found one site that said he was “trained in secular geology,” but it seems he does not have a degree in geology.

Early in the book, Nurre states: “Secular geology claims that the universe is 15 billion years old and the Earth is about 4.6 billion years old. If this is true, then the entire Bible is a lie!” [emphasis added]. This false dichotomy of “either young-Earth creationism is true or the Bible is false” has driven countless young people out of the church, and has set up an unfortunate barrier to faith for many scientifically-literate people. When people see the only options as young-Earth creationism or rejection of Christianity, many opt for a rejection of Christianity, especially in light of the steady stream of bad science that has come out of the young-Earth movement over the past century. I believe the Bible is inerrant and trustworthy, and that all truth is God’s truth, whether revealed in Scripture or in creation. An alternative way to look at Earth history, then, is that if there seems to be a conflict between science and the Bible, then either our interpretation of science is wrong, or our interpretation of the Bible is wrong. In this case, if Earth is old, it is not that “the entire Bible is a lie,” but that it could be that the young-Earth interpretation is what is at fault. Being that there are alternative interpretations of the opening chapters of Genesis held by Bible-believing Old Testament scholars, and that young-Earth geology does not work, I side with old-Earth biblical interpretations.

The errors in the book are numerous:

I could list many more, but you get the idea. Even if I were still a YEC, I would not endorse this book.

Both books give typical young-Earth creationist explanations for the rocks and other geologic features of Yellowstone. I will take a closer look at two of these, showing why it is not credible to squeeze the history of Yellowstone into the short time frame required by YECs.

The fossil forests of Yellowstone are found in the Eocene Absaroka Volcanic Supergroup, which covers an extensive area north, east, and southeast of Yellowstone National Park. These rocks were formed as the result of the eruptions of a series of large stratovolcanoes, similar to the volcanoes of the Cascade Range. Many of the rocks are interpreted to be volcanic mudflow deposits (lahars) rather than as lava flows.

The authors of both books point to the 1980 eruption of Mt St Helens in Washington for an explanation for the petrified forests of the Absaroka Supergroup. Spirit Lake at Mt St Helens contains many thousands of trees that could eventually be incorporated into sedimentary rocks as a fossil forest. The young-Earth thinking is that if a single local catastrophe like Mt St Helens could create a local fossilized forest, then a much larger catastrophe (Noah’s flood) could create much larger fossilized forests such as found at Yellowstone.

It is valid to consider the deposits from contemporary volcanic eruptions, such as the 1980 eruption of Mt St Helens, when seeking to interpret the formation of ancient rocks such as in the Absaroka Volcanic Supergroup. What we learn from modern eruptions is that volcanoes can produce lahars, which may contain logs and tree fragments, which will lead to layers of rock with petrified wood. It is legitimate, therefore, to conclude that the petrified forests of Yellowstone very well may have been formed in an analogous way.

The problems with the YEC interpretation of fossil forests at Yellowstone are numerous, and are not addressed in these two books:

The Yellowstone Caldera is the result of the most recent “supervolcano” eruption at Yellowstone. The Yellowstone area has actually been the home to two supervolcano eruptions (volume > 1000 km3), several smaller caldera eruptions, and numerous smaller, though often still enormous, rhyolitic and basaltic lava flows. The present Yellowstone caldera is largely filled by these later flows. All of these eruptions occurred in what geologists refer to as the Quaternary period, which covers the past 2.6 million years of Earth history. YECs believe that this volcanism occurred at the end of Noah’s flood, or during a few centuries after the flood.

Both books refer often to the volcanism associated with the Yellowstone Caldera, without explaining how this is better explained by YEC, or acknowledging the numerous problems with trying to squeeze more than sixty distinct volcanic eruptions into a short period of time. There is abundant evidence for unconformities (erosional surfaces) between lava flows. This requires that lavas had time to completely cool between eruptions, something which takes time.

A fatal complication for the YEC explanations regarding Quaternary volcanism at Yellowstone is the evidence for alternation between volcanism and glaciation on the Yellowstone Plateau. Young-Earth creationists insist that there was only one ice age following Noah’s flood (though of course the Bible says nothing about when or how many ice ages occurred), yet at Yellowstone it is clear that a massive ice cap formed over the higher elevations more than once. For instance, volcanic ash from the final large caldera eruption (Lava Creek Tuff) is found on the Great Plains in Saskatchewan sandwiched between glacial deposits, which means there was glaciation both before and after this caldera eruption. Furthermore, a lobe of one of the final large rhyolite flows overlies glacial moraines near West Yellowstone, indicating that an ice cap had had time to form between emplacement of these later lava flows.

Here is what the Quaternary history of Yellowstone would have to look like in the young-Earth model:

The whole thing can be summarized as “too many events, too little time.”

I would not recommend either of these books for use by Christians seeking to gain understanding of the geologic history of Yellowstone National Park. The Bible does not say anything about geologic events such as volcanism and glaciation, so YEC efforts to explain the geology of places such as Yellowstone is biblically unwarranted. Furthermore, YECs have been unsuccessful in explaining the complexity of geological features at places such as Yellowstone.

One can be a Bible-believing Christian and not hold to belief in a young Earth or global flood. A few of these alternative interpretations are presented in the Report of the Creation Study Committee of the inerrancy-affirming Presbyterian Church in America.