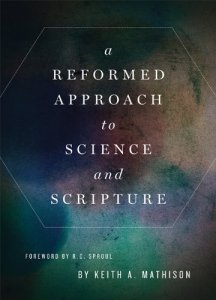 A Reformed Approach to Science and Scripture is largely a summary of the insights of the late theologian R.C. Sproul on the topic of the relationship between science and Christian faith. The author is Keith Mathison, professor of systematic theology at Reformation Bible College in Florida, and the book is available as a free Kindle book. Don’t let the zero-dollar price tag fool you; this is a great little e-book.

It is common for young-Earth creationists to ask something like, “Are you going to believe God’s infallible Word or man’s fallible science?” There are many ways that an old-Earth Christian could respond to this false distinction between science and Christian faith. I usually respond by saying that I believe that all truth is God’s truth, and that if there appears to be a conflict between the Bible and science, then either we misunderstand God’s Word, God’s world, or both.

R.C. Sproul basically said the same thing, and much more, as Mathison outlines in this book. Much of the book focuses on the topic of the age of the Earth, but it touches on other science and faith issues as well. The book has seven chapters, which I will summarize:

Chapter 1 – All Truth is God’s Truth

It is common for postmodernists to question the concept of truth, but unfortunately, it is also common for Bible-believing Christians to do the same.  These otherwise theologically-orthodox Christians fear that if we consider God’s revelation in creation to be infallible or authoritative, that this will somehow detract from the inerrancy and authority of Scripture. Mathison points to the teachings not only of Sproul, but of Augustine, Calvin, and Bavinck to show that “all truth is God’s truth” is an idea that is consistent both with the doctrine of biblical inerrancy and Reformed theology in general.

Mathison distinguishes general revelation, which is available to all, and special revelation, such as the Bible, which points us to God’s work of salvation. Because God is truthful in everything he does, Mathison reminds us that “God’s revelation in creation is equally as infallible as His revelation in Scripture, because in both cases, it is God who is doing the revealing, and God is always infallible.”

Both Luther and Calvin viewed Copernicus’s heliocentrism as heretical. This chapter takes a closer look at the Copernican Revolution, and what we now recognize to be faulty biblical hermeneutics by the reformers.

In this chapter, the author takes a closer look at how the fall into sin affected human reasoning. Human reasoning is affected by sin, but it is not totally ruined. This is especially true in regards to general revelation. Unbelievers will get some things wrong in their understanding of the creation, but this is true for believers as well, and is also true of believers when it comes to Biblical interpretation.

Chapter 6 – When Science and Scripture Conflict

Sproul stated that if he is sure he correctly understands the Scripture, and if Scripture and science seem to conflict, that he would “stand with the Word of God a hundred times out of a hundred.” I agree with this statement. In most situations, we must be willing to take a closer look at both our scientific and Biblical interpretations. One key is to discern what Scripture actually teaches, and the failure to do this is where many science-faith conflicts come from. Mathison states that “Christians have absolutely nothing to fear ultimately from scientific research.”

Chapter 7 – The Age of the Universe and Genesis 1

Sproul, who leaned towards a young-Earth, stated that “the Bible does not give us a date of creation.” In light of this, Mathison warns us against creating false dilemmas in discussions about origins. As an example, Mathison writes, “I have also encountered Christians who have argued that any believer who is convinced that the universe is billions of years old should abandon Christianity because it would mean that the Bible is not true.” This false dichotomy is, unfortunately, common in the young-Earth movement, and it is very harmful both for discipleship and evangelism. When we teach our youth that if the Earth is millions of years old the Bible is a lie, we set them up for a fall. If we present this false dichotomy in evangelism to scientists or the scientifically-literate public, we place an unnecessary obstacle to Christian faith.

It is significant that R.C. Sproul leaned towards the young-Earth interpretation of Genesis, yet was able ultimately to say “I don’t know.” Sproul maintained a charitable relationship with those he disagreed with, which is a loving, Christ-following example for those on all sides of the origins debates within the Church.

The book is available in Kindle format from Amazon.

One thought on “Review – A Reformed Approach to Science and Scripture”