I recently spent about seven hours at the Creation Museum run by the young-Earth creationist (YEC) organization Answers in Genesis in northern Kentucky (I visited the museum, not the new Ark Encounter). As I anticipated, the exhibits at the museum are all of the highest quality. Whether the displays were animatronic dinosaurs, dioramas of the garden of Eden; fossils, mounted insects, or reconstructions of hominids, they were at the same level of quality one would expect to find in the Smithsonian Institution.

One thing that surprised me was how crowded the museum was. I was there on a Saturday, which is probably the museum’s busiest day of the week. Because of the crowds, I moved through the first parts of the “Walk Through History”—the main exhibits portion of the museum—at a snail’s pace. That so many people would spend $30 per adult to visit the Creation Museum speaks of the enormous influence young-Earth creationism has on the general Evangelical culture in America. 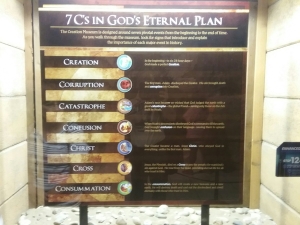 Much of the museum’s “Walk Through History” is arranged around the “7 C’s” of salvation. My young-Earth siblings in Christ and I have the gospel in common , with some secondary areas of disagreement:

If the YECs get the gospel right, why do I write against them? There are certainly thousands of people who claim they came to faith—or have had their faith strengthened—through young-Earth creationism, and I rejoice when people come to faith in Christ (Phil 1:18). But countless others have been turned away from Christianity because of the really bad science presented at places like the Creation Museum. Many of these are young people who grew up in the church on a steady diet of YEC teachings in Sunday school, youth groups, and Christian schools. Once they grew up and figured out that YEC does not work in the real world, they discarded their Christianity along with their AiG or Dr. Dino videos. After all, they had had “If the Earth is millions of years old, the Bible isn’t true” drilled into their heads by well-meaning YEC advocates.

In addition to driving youth out of the church, YEC teachings close the door for fruitful evangelism to many outside the church, adding fuel to the fire of those who find Christianity unreasonable. In a society that is increasingly hostile to Christianity, we should not be surprised that many find Christianity to be foolish. But let it be the foolishness of the cross (1 Cor 1:17-2:5) that drives people away from Christ, not the foolishness of bad YEC science.