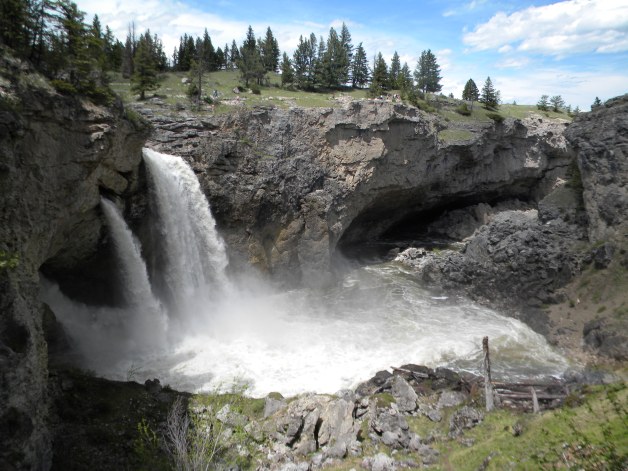 My favorite waterfall in Montana is Natural Bridge Falls, located on the Boulder River, south of Big Timber. At high water—such as in this photo taken this spring—some of the water flows over the top of the cliff, while a considerable part of the flow comes out of caves in the side of the cliff. Later in a dry summer and into the fall and winter, the flow is restricted to the caves. On the right side of the photo, you can see where the river flows into what appears to be a rather large room of a collapsed cave. The Boulder River likely flowed through this cavern before it collapsed. Shortly around the corner to the right, the river disappears into a rubble of limestone boulders, also partly the product of cavern collapse.

The caverns, waterfall, and downstream canyon are all in limestones of the Mississippian Madison Group.

The waterfall is about thirty minutes south of Big Timber, and has a paved trail with interpretive signs. There are also dirt paths that go along the river and down to the plunge pool. Also of geological interest in the area are some excellent exposures of the Stillwater Complex, one of the world’s most famous layered intrusions. I brought home a beautiful piece of anorthosite for my rock garden.