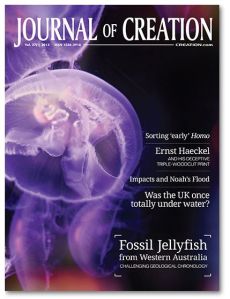 Jellied jellyfish — The cover of the April 2013 Journal of Creation has a picture of a jellyfish, with a caption that states “Fossil Jellyfish from Western Australia: Challenging Geological Chronology.” The article is “Fossil jellyfish from the Pilbara, Western Australia” by Philip Worts. The article is not available online yet, but I assume there is a claim that the Archean rocks of the Pilbara Craton—which contain what many believe to be Earth’s oldest known bacteria fossils—contain jellyfish fossils as well. I haven’t read the article so I cannot comment on that aspect.

What is harder to believe, that jellyfish got preserved in quiet, oxygen-poor sedimentary environments, or that somehow the carcasses of these fragile creatures stayed intact in the abrasive sediment-rich slurry that the YECs propose for Noah’s flood?

More unsalty salt — Last week I wrote a critique of a young-Earth creationist proposal that evaporites (rock salt, gypsum, etc.) were formed during Noah’s flood by crystallization from “salt magma.” Now there is a homeschool study guide to go along with the salt magma YouTube video. Most homeschooled kids won’t be harmed by this, but those who do any critical thinking or investigation about the video could be at risk of being “already gone.” This is especially true when they are presented with the false dichotomy of “if YEC isn’t true, then Christianity isn’t true.”

Atheist to deist to Christian — Christianity Today has the story of Jordan Monge: The Atheist’s Dilemma: I tried to face down an overwhelming body of evidence, as well as the living God.

But never once did I have to sacrifice my intellect for my faith.

It was the only rational course of action.

Persecution of Christians continues — Secular Sweden Sees No Problem in Sending Christian Converts Back to Iran?

What is worse, a toy or a bloody conquest? — Lego drops Jabba toy after Muslims complain — So, it’s bad that this Lego set has a building that sort of looks like a mosque in Istanbul, but it is just fine that the Turks invaded the Christian Byzantine Empire, and converted its greatest church, the Hagia Sophia, into that mosque?

8 thoughts on “Around the web — 4/7/2013 — Archean jellyfish? Homeschool uncritical thinking? An atheist’s journey!”