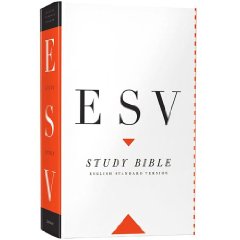 The ESV Study Bible (ESV is the English Standard Version translation) is a masterpiece of conservative Evangelical scholarship. The scholars who put this volume together are highly-qualified Bible experts who have a high respect for the Bible as the Word of God.

For those of you not familiar with the concept of a study Bible, this contains more than just the text of the Bible. It contains many thousands of cross-references and explanatory notes, plus drawings, maps, articles, and an extensive concordance (index). The ESV Study Bible is a massive work, with over 2,000,000 words on 2750 pages.

The Introduction to the ESV Study Bible makes it very clear that the authors of the various articles and study notes share a commitment to the Bible as the inerrant Word of God. The Introduction was written by Lane Dennis of Crossway Books and Bibles, and Wayne Grudem of Phoenix Seminary. Here are some quotes from the introduction:

The first kind [of words in the ESV Study Bible] is the actual words of the Bible, which are the very words of God to us. (p. 9)

The notes are written from the perspective of confidence in the complete truthfulness of the Bible. (pp. 10-11)

Because of this commitment to the truthfulness of the Bible, many would think that the ESV Study Bible would give a strong endorsement of the “literal” six-day interpretation of the young-Earth creationists, with a roughly 6000-year old Earth and a global flood that deposited most sedimentary rocks. The authors of the notes, however, take a cautious and broad approach to questions of the age of the Earth and the extent and work of the flood.

There are two groups of people who insist that Genesis teaches a young Earth. The first of these is the young-Earth creationists, led by organizations such as Answers in Genesis and the Institute for Creation Research. They are convinced that the Bible requires a young Earth, and distort science to make it fit their interpretation. The other group is the atheists and skeptics. It is in their interest to say that the Bible requires a young Earth, as it makes it easier for them to not believe. For the most part, neither group is willing to consider Biblical scholarship that would upset their preconceptions.

INTRODUCTION TO GENESIS — Genesis and Science — Overview of interpretations

The ESV Study Bible‘s Introduction to Genesis (which is different than the Introduction I have quoted from already) was written by T. Desmond Alexander of Union Theological Seminary in Belfast. It has a section called “Genesis and Science,” which begins with an overview of the various positions that are held by theologically-conservative Biblical scholars.

The relation of Genesis to science is primarily a question of how one reads the accounts of creation and fall (chs. 1–3) and of the flood (chs. 6–9). What kind of “days” does Genesis 1 describe? How long ago is this supposed to have happened? Were all species created as they are now? Were Adam and Eve real people? Are all people descended from them? How much of the earth did Noah’s flood cover? How much impact did it have on geological formations?

Faithful interpreters have offered arguments for taking the creation week of Genesis 1 as a regular week with ordinary days (the “calendar day” reading); or as a sequence of geological ages (the “day-age” reading); or as God’s “workdays,” analogous to a human workweek (the “analogical days” view); or as a literary device to portray the creation week as if it were a workweek, but without concern for temporal sequence (the “literary framework” view). Some have suggested that Genesis 1:2, “the earth was without form and void,” describes a condition that resulted from Satan’s primeval rebellion, which preceded the creation week (the “gap theory”). There have been other readings as well, but these five are the most common.

None of these views requires denying that Genesis 1 is historical, so long as the discussion in the section on Genesis and History is kept in mind. Each of these readings can be squared with other biblical passages that reflect on creation. (pp. 43-44)

Note that only one of the five primary alternatives—the “calendar day” reading— requires a young Earth. The others each have room—or require—an Earth that is older than 6000 years. I personally make no commitment to a specific view, except to say that I rule out the calendar day interpretation based on external evidence (keeping in mind that all truth is God’s truth).

Note also that the Introduction to Genesis indicates that even Exodus 20:11 does not require a literal, seven consecutive day interpretation:

The most important of these [passages] is Exodus 20:11, “in six days the Lord made heaven and earth, the sea, and all that is in them, and rested on the seventh day”: since this passage echoes Genesis 1:1–2:3, the word “day” here need mean only what it means in Genesis 1. Therefore, it does not require an ordinary-day interpretation, nor does it preclude an ordinary-day interpretation. (p. 44)

INTRODUCTION TO GENESIS — Genesis and Science — Is Genesis 1 a scientific account?

Should Genesis 1 be called a “scientific account”? Again, it is crucial to have a careful definition. Does Genesis 1 record a true account of the origin of the material universe? To that question, the answer must be yes. On the other hand, does Genesis 1 provide information in a way that corresponds to the purposes of modern science? To this question the answer is no. Consider some of the challenges. For example, the term “kind” does not correspond to the notion of “species”; it simply means “category,” and could refer to a species, or a family, or an even more general taxonomic group. Indeed, the plants are put into two general categories, small seed-bearing plants and larger woody plants. The land animals are classified as domesticable stock animals (“livestock”); small things such as mice, lizards, and spiders (“creeping things”); and larger game and predatory animals (“beasts of the earth”). Indeed, no species, other than man, gets its proper Hebrew name. Not even the sun and moon get their ordinary Hebrew names (1:16). The text says nothing about the process by which “the earth brought forth vegetation” (1:12), or by which the various kinds of animals appeared—although the fact that it was in response to God’s command indicates that it was not due to any natural powers inherent in the material universe itself. (p. 44)

INTRODUCTION TO GENESIS — Genesis and Science — The purpose of Genesis

The primary purpose of Genesis 1 seems to be to identify God as the Creator of everything who is completely separate from the creation, and to contrast him to the gods who appear in the creation accounts of the nations the Hebrews had contact with.

This account is well cast for its main purpose, which was to enable a community of nomadic shepherds in the Sinai desert to celebrate the boundless creative goodness of the Creator; it does not say why, e.g., a spider is different from a snake, nor does it comment on what genetic relationship there might be between various creatures. At the same time, when the passage is received according to its purpose, it shapes a worldview in which science is at home (probably the only worldview that really makes science possible). This is a concept of a world that a good and wise God made, perfectly suited for humans to enjoy and to rule. The things in the world have natures that people can know, at least in part. Human senses and intelligence are the right tools for discerning and saying true things about the world. (The effects of sin, of course, can interfere with this process.) (p. 44)

The doctrine of creation is much richer than merely addressing questions of how and when God created the universe, life, and human beings.

INTRODUCTION TO GENESIS — Genesis and Science — Adam and Eve

I often state my position as “I believe in a real creation of the universe by the Triune God of the Bible, in a real Adam in a real garden, committing a real sin with real consequences, and in Jesus Christ as God’s only solution to those consequences.”

It is clear that Adam and Eve are presented as real people. Their role in the story, as the channel by which sin came into the world, implies that they are seen as the headwaters of the human race. The image of God distinguishes them from all the animals, and is a special bestowal of God (i.e., not a purely “natural” development). It is no wonder that all human beings share capacities for language, moral judgment, rationality, and appreciation for beauty, unlike and beyond the powers observed in the animals; any science that ignores this fact does not faithfully describe reality. The biblical worldview leads one to expect as well that all humans now share a need for God and a bent toward sin, as well as a possibility for faith in the true God. (p. 44)

INTRODUCTION TO GENESIS — Genesis and Science — The flood

Young Earth creationists insist that the Bible requires a global, catastrophic flood. Many conservative scholars, including the editors and contributors to the ESV Study Bible, have looked closely at the text and determined that this is not necessary.

One must take similar care in reading the flood story. The notes will discuss the extent to which Moses intended to describe the flood’s coverage of the globe. Certainly the description of the flood implies that it was widespread and catastrophic, but there are difficulties in making confident claims that the account is geared to answering the question of just how widespread. Thus, it would be incautious to attribute to the flood all the geological formations observed today—the strata, the fossils, the deformations, and so on. Geologists agree that catastrophic events, such as volcanic eruptions and large-scale floods, have had great impact on the landscape; it is questionable, though, whether these events can in fact achieve all that might be claimed for them. Again, such matters do not come within the author’s own scope, which is to stress the interest that God has in all mankind. (p. 44)

Could the introductions and notes in the ESV Study Bible be wrong on these things? Yes. Could the young-Earth creationists be wrong in their interpretation of these things? Also yes. But it is clear that there are a number of conservative, Bible-believing scholars who either advocate or are willing to accept an old Earth and local flood. Based on external evidence, as well as Biblical exegesis, I choose to side with the old-Earth Biblical scholars.