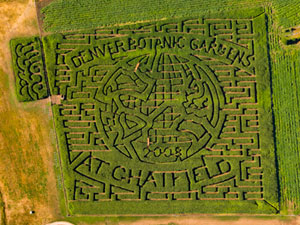 We went to the eight acre Denver Botanic Gardens corn maze today (as I mentioned yesterday). It was fun; not only to do the maze, but to be out in a field. Any escape from the city is good. The corn was not planted as densely as in the one other corn maze I’ve been to, which made it easier for some people to make shortcuts through the rows of corn. Eventually, as more people take the new paths, it will be difficult to tell which paths are authentic, and which are cheats, which takes away a bit of the fun. Still, it was a good family outing.