This item was originally posted in February 2007. It is now part of my blog recycling program. Because I have new readers of The GeoChristian, I will occasionally go back and re-use some of my favorite blog entries.

Today is Valentine’s Day, so…

Is Mars the planet of war? After all, Venus was the Roman goddess of beauty and love, while Mars was the god of war.

This Valentine’s day, let us resolve to think better of the red planet! Mars is really a happy, loving place, as indicated by the following images taken from orbit around the planet: 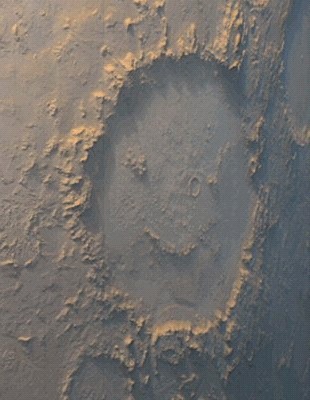 Venus, on the other hand, is a deadly place, with searing temperatures, crushing atmospheric pressure, and sulfuric acid clouds. Mars really is a peaceful and homey place in comparison, the best planet in the solar system (other than earth) to take your sweetheart on this special day.

One thought on “Mars and Valentine’s Day”