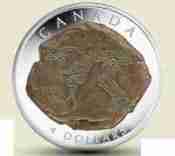 The Royal Canadian Mint has released a commemorative $4 coin featuring a parasaurolophus, a Late Cretaceous dinosaur found in Alberta:

The mint has produced 20,000 of the parasaurolophus coins for sale to collectors, with a price of $39.95 each (Canadian dollars).

One thought on “Dinosaur Coins”