THE QUEEN JAMES BIBLE — Sadly, I am not kidding.

The Queen James Bible is a Bible for Gays, re-“translated” to make “homophobic” interpretations impossible.  Read more about it at First Things.

NOAH’S FLOOD IN THE BLACK SEA BASIN — There were a number of articles on the internet this week about evidence that Noah’s flood occurred in the Black Sea basin, an idea that has been around for over a decade. One would expect a flood the size described in Genesis 6-9 to have left behind evidence, and this could be it — a colossal flood adjacent to the mountains of Ararat.

IT’S A BIRD, IT’S A PLANE… NO, IT’S THE INTERNATIONAL SPACE STATION! — If you have never seen the ISS fly overhead, you spend too much time looking at your feet. You can sign up for an email or text letting you know when the ISS will be brilliantly visible from your location. Just go to spotthestation.nasa.gov.

THE DEBATE ABOUT ANTHROPOGENIC GLOBAL WARMING IS NOT OCCURRING IN SCIENTIFIC JOURNALS — according to Why Climate Deniers Have No Scientific Credibility – In One Pie Chart. On the pie chart below, make sure you don’t miss the itsy-bitsy sliver of a line that represents “denier” papers in peer-reviewed scientific journals.

The debate is mostly occurring on blogs, talk radio, and newspapers. That should say something. 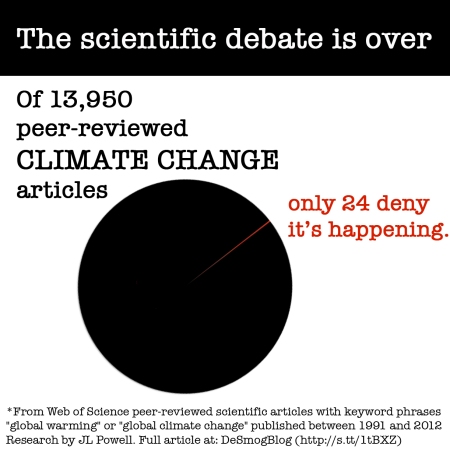