The US Geological Survey has a news release regarding climate during the mid-Pliocene Epoch, between 3.0 and 3.3 million years ago: Getting Warmer? Prehistoric Climate Can Help Forecast Future Changes. Scientists used paleontological data (i.e. fossils) to reconstruct surface water and deep-ocean temperatures, as well as ocean circulation patterns. Here are some of the findings:

Here’s a map showing the sea surface temperature (SST) anomaly for August, which is a comparison of the Pliocene SST with today’s SST. The dark blotch over the North Atlantic is the area that experienced the most extreme warming in the Pliocene compared to today. The yellow areas were about 2°C warmer than today. Note also  the warmer area off the Pacific coast of South America. This indicates an el Niño-like warming of the east Pacific surface waters in the Pliocene. 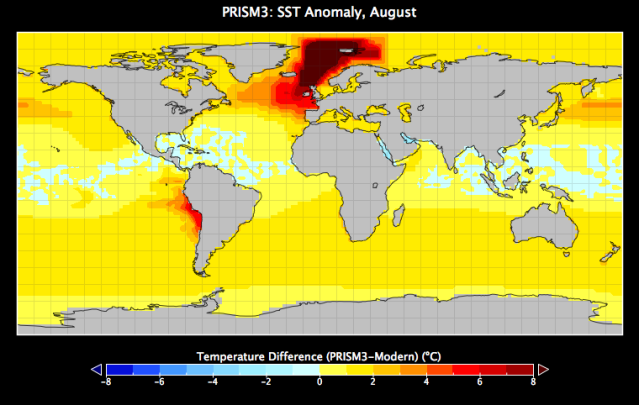 This study shows again the importance of a geological perspective when talking about climate change:

One thought on “The Pliocene as a model for the 21st century?”