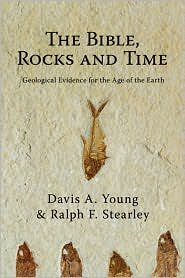 Back in the 1980s, a key book providing both Biblical and geological evidence for an old age for the Earth was Christianity and the Age of the Earth by Davis Young, professor of Geology at Calvin College. It is still a useful book, but it is about to be superseded by The Bible, Rocks, and Time: Geological Evidence for the Age of the Earth, authored by Davis Young, who is now an emeritus professor, and Ralph Stearley, who is also a professor of Geology at Calvin.

The original book, Christianity and the Age of the Earth, played an important role in my education as a Christian geologist. I switched my major to geology my junior year of college because I was fascinated with the Earth and its history. At the same time, I attended a church where young-Earth creationism was the norm; anything else was considered to be a cave-in to godless evolutionism. Through Young’s book (and also through Evolution: Nature and Scripture in Conflict? by Pattle Pun) I came to see that one could make a strong argument from the Scriptures for allowing an old age for the Earth. This saved me, perhaps, from a crisis of faith that others have gone through when they see that the arguments of young-Earth creationism don’t work.

This new book has four sections:

The Bible, Rocks, and Time will be available from Amazon for $19.80 the beginning of October. It is also listed at Barnes and Noble and Christianbook.com. I’ve pre-ordered my copy, and look forward to every page.

3 thoughts on “The Bible Rocks”