These two images of the Los Angeles area were taken a little over three hours apart on October 21, 2007, showing the rapid growth of the fires that have already destroyed hundreds of structures and forced the evacuation of hundreds of thousands of people. The fires spread rapidly due to hot, dry Santa Ana winds, which blow out of the Mojave desert to the east, as can be clearly seen by following the smoke in the images. 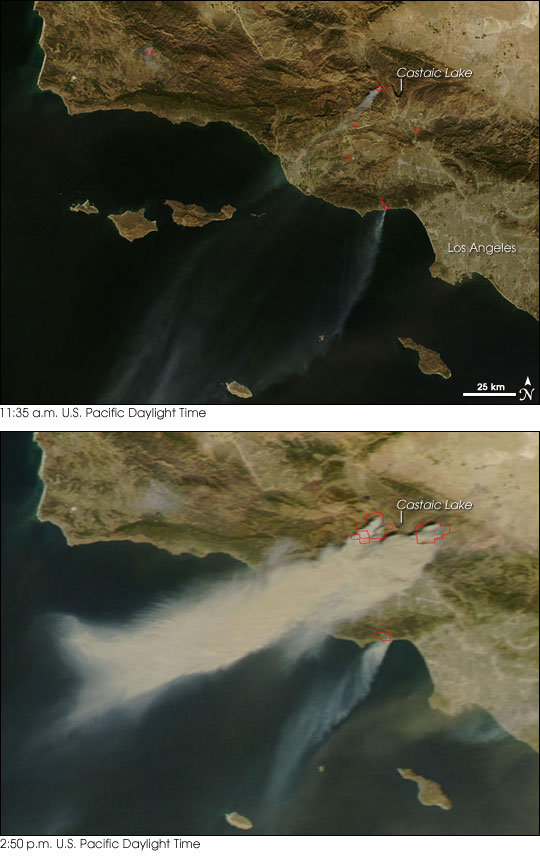 The images are from NASA’s Earth Observatory site, and I got the link from Geology News.

A description from the Earth Observatory:

Santa Ana winds are a California firefighter’s nightmare. These blustery, dry, and often hot winds blow out of the desert and race through canyons and passes in the mountains on their way toward the coast. The air is hot not because it is bringing heat from the desert, but because it is flowing downslope from higher elevations. As fall progresses, cold air begins to sink into the Great Basin deserts to the east of California. As the air piles up at the surface, high pressure builds, and the air begins to flow downslope toward the coast. When winds blow downslope, the air gets compressed, which causes it to warm and dry out. In fact, the air can warm at a rate of 10 degrees Celsius per kilometer of descent (29 degrees Fahrenheit per mile). Canyons and passes funnel the winds, which increases their speed. Not only do the winds spread the fire, but they also dry out vegetation, making it even more flammable.

Pray for the people affected by this natural disaster.